King & Wood Mallesons has long prided itself on its ability to anticipate trends, the diversity of structures on which it advises and its deep knowledge of investor requirements when it comes to fund formation. Its London-headquartered funds team is understood to have closed more funds across Europe than any other law firm over the past 12 months. In addition its partners are often involved in regulatory change and are long-standing active members of the technical committees, councils and working groups for the BVCA, EVCA, AIMA, EMPEA and other industry associations. Highlights over the judging period include working with Palamon Capital Partners on an innovative stapled secondary transaction, as well as advising on the establishment and fundraising of the UK Green Investment Bank Offshore Wind Fund, which is the first fund launched by the GIB and is now the UK’s largest renewable energy fund, with a target of £1bn.

Judges said: KWM won both the judges and public vote, with the judging panel commenting on the strength of their market coverage 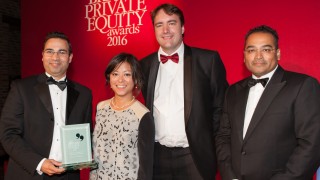